An item bouncing around the internet declares there are two kinds of people in the world: those who return shopping carts and those who don’t.

Some would say this is an oversimplification, but I think it’s a useful distinction.

The kind of person who doesn’t bother to roll an empty cart into the corral (which generally is no more than 20 to 30 feet away) is someone with a self-centered approach to life. There isn’t a thought of what this loose cart may do to other automobiles, or about how deserted carts contribute to a shortage for incoming shoppers. Worse, when the cart is left in a parking spot, it blocks a space. Worse yet, I’ve seen people leave an abandoned cart in a handicapped spot. Cart deserters operate under the assumption that everyone else will accommodate their lazy choice, and eventually an employee will pick up the cart.

With concessions for the elderly, handicapped, and parents shepherding young children, cart desertion is just shorthand for lack of consideration. 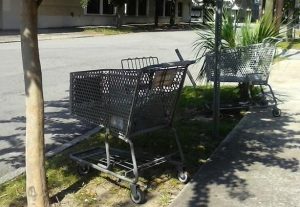 For two years, I lived in an urban location and frequently saw neighbors pushing grocery carts from Kroger down the city sidewalks towards home. Not surprisingly, on my walks, I saw many abandoned carts, and nothing says “ghetto” like upended carts tossed into vacant lots. At 75 to 150 dollars per cart, I can only imagine what this theft cost the store. Kroger also paid a team to prowl the downtown streets in a large pickup truck to repatriate grocery carts. Their truck bed was typically full.

Sometimes I’d find a cart left on the street corner outside my apartment, so I’d roll it four blocks back to the store, just as I always grabbed a rogue cart when I walked through the parking lot to the entrance. For one reason, it prevented hazardous situations, such as the one I witnessed on a windy fall day when an abandoned cart at Staples accelerated across the asphalt and t-boned a Lexus.

For another, it gave the stocker, bagger, or check-out clerk who got tasked with rounding up the carts–sometimes in rain or freezing cold–a break. I once pushed a cart through several inches of snow and slush (not easy), to spare the cart retriever the hassle of chasing down one more. 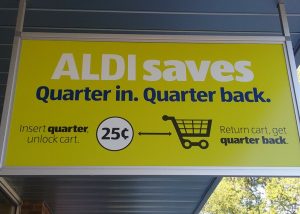 I’ve never seen deserted carts in the Aldi’s parking lot. That’s because in the epic measure/countermeasure struggle, Aldi’s has hit upon a solution with their twenty-five cent deposit. More than people want to discard their carts, they want their coin back. They have a quarter-sized piece of skin in the game.

Even without a quarter on the line, I’d like to see shoppers exercise this simple act of personal responsibility in parking lots. It’s just common courtesy. 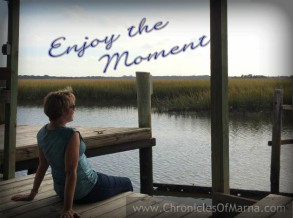